No, he was not! Palme was shot by a professional hit man!

Listen to the player by clicking the play button.
Please write a comment in Swedish or English below this article! 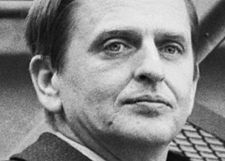 Late at night February 28, 1986, I was driving home from one of my friends place outside the north part of Stockholm Sweden. I drove from north right in through the centre of Stockholm and out of Stockholm on the south side. There was almost no traffic at all so I reached my home rather fast. When I got home I turned on the radio, which I always do before going to bed.

One minute later the music program were cut off and they sent out the shocking message that our Prime Minister, Olof Palme, was shot dead in the street outside a cinema, in the centre of Stockholm. This must have happened just a few minutes before I reach the centre of Stockholm on my way home. Immediately I thought that this was really odd.

There were no police blocking the roads inside or out from Stockholm! I actually did not see one single police car on my way home through the city! I checked the time again. Maybe I was mistaken and actually already got out of the city when they found out that our Prime Minister was shot? No, I figured out that I really did not even reach the north side of Stockholm yet, the time he was killed. That means that the killer could easily escape out of Stockholm the same way I took!

A Prime Minister is shot and not one single Police or road block even on the highway out from Stockholm? From that day I knew that something was terribly wrong!

A big investigation started. There were a lot of suggestions pointing at different directions. Who was the killer?

Lisbet Palme, Olof’s wife, was walking hand in hand with Olof when a man came asking if he was Olof Palme. Olof said yes, and then the man shot him both in his spinal cord in the neck and in his head. Every one of those bullets would have killed him. He also shot Lisbet in her soft part of her shoulder with one bullet and then he ran away.

The bullet just went in and out through the other side of Lisbet’s shoulder without damaging any vital parts inside.

Question: Would you have done that if you were a professional killer? Answer: Of course not! You would for sure kill Lisbet too. She was a witness seeing your face! All this was out in the newspapers day after the shooting.

The Police were now investigating the Kurds, PKK, a weapon deal with India and a lot of possible leads that could have been enemies to Olof Palme. They also talked about a possible lonely “crazy man”, looking like a drug addict.

Later on the Police found a man that fitted in to that description, Christer Pettersson. The Police lined him up together with 9 other nice dressed gentlemen. Now Lisbet Palme could take a good look at all of them and point out the killer from the picture she had in her memory from that night. First she hesitated a lot but then she finally pointed out Christer Pettersson. After all, he was the only one looking bad in his dirty pullover, unshaved, and dirty hair. The others looked like nice and well dressed businessmen.

Everybody was happy. Sweden finally caught the murderer!

Now Christer Pettersson was brought to court. His defense lawyer had no problem to prove that his client was innocent. Christer became a free man but still a suspect. He could now go back to alcohol and drugs and live his normal life again.

The chief of the investigating team inside the Police, Hans Holmér, continued to look for leads in PKK, weapon deal with India and a lot of side tracks leading nowhere.

Hans’s good old friend, Ebbe Carlsson, also started his own private investigation, which made the soup totally messed up. Now there were leads pointing in all directions at the same time.

As always when something in this magnitude happens, there are a lot of witnesses seeing strange things here and there. One of the true stories, coming from several people that did not know each other, said that there were some strange guys with walkie-talkies in their hands, in the subway station Olof and Lisbet Palme were using going to the cinema.

Luckily for Hans Holmér, Olof Palme had a lot of enemies everywhere, from right wing to left wing people. USA did not like him because he joined a demonstration against the Vietnam War. Israel did not like him because Olof was standing on the Palestine’s side. Even people in his own political party, the Social Democrats, hated him, because he did what he wanted to do with the political party, without asking for opinions. In short he was a powerful man with lots of enemies.

Olof also liked women, and the rumors said he had a lot of mistresses everywhere. Maybe, just maybe, Lisbet Palme did not like that? At least I would not be surprised if she got a bit irritated.

The Swedish Police investigator, Hans Holmér, was still searching in the PKK track. PKK was in those days known by SÄPO as a terrorist group. SÄPO have the same function as well-known Secret Service have in USA.

Another thing that obviously is a fact in the investigation is that it was only three persons in the world, who knew that the Palme couple would go out this night, without their normal life guards from the Swedish Security Police, SÄPO. According to the court documents these three people were Lisbet Palme, Olof Palme and their son Mårten Palme. Lisbet was the one suggesting to Olof, that they should go to the cinema without the life guards. She didn’t like to have them hanging around her feet 24 hours a day. Olof Palme made the call to SÄPO about their request to skip the life guards this evening.

According to my way of thinking, or maybe just common sense again, this little puzzle piece and fact disqualifies PKK and “lonely crazy men”. It also disqualifies other organizations, except the Swedish SÄPO. SÄPO were actually the only organization that knew just about an hour before Olof and Lisbet went to the cinema, that they were going there without life guards.

The investigating chief of Police, Hans Holmér, were still chasing his ghosts in PKK, the weapon deal with India and now also some guy in Israel, who according to rumors might be the “hit man”.

Later investigations also showed that there were some secret documents about the Palme murder, missing from SÄPO’s own office. Who can make a burglary in the secret Swedish Police own office, and how will the burglar know exactly where to start looking for those specific documents? Now it started to smell really bad!

Just suddenly the focus was moved again from SÄPO to a Swedish diplomat, who had something to do with the weapon deal with India. That guy was pushed out in front of a subway train in a subway station in Stockholm and died instantly.

Hans Holmér working for SÄPO was now looking happy in TV, because maybe his lead to the weapon deal with India was correct after all? At least the embarrassing story about the missing documents in SÄPO was now forgotten. An almost too good smoke screen, if you ask me. What a coincident?

Another fact from the court documents was that Lisbet Palme wanted to be the big boss for UNICEF, the children organization in UN. Olof did not like that idea at all! He thought it was enough with one person in the family standing in the spotlights or in front of the TV cameras. He stopped her to fulfill her dreams.

Another odder thing from the investigation was that Lisbet were having a coat on going to the hospital that night when her husband was killed. When she entered the hospital another photo was taken of her by another photographer, and now suddenly she wears another coat. Both coats had bullet holes at exactly the same place.

In my world that just doesn’t happen by pure coincident! Somebody got sloppy with details!

Hans Holmér was now of course working hard with the weapon deal with India, to find the murderer.

When you try to make a profile of a possible murderer, you have to start searching for the murderer within the closest relatives and friends first. According to statistics you will find about 95 % of all murderers in that group.

Another thing that also all the murder investigators in the world know is that you also have to search for a motive. Either someone will gain something to kill you, or maybe they will kill you just to stop the misery you give them daily. The “lonely crazy man” does not more or less exist statistically, so why start searching for him?

The third thing everybody working with this knows about is that it can be one person wanting to kill you, but another one who actually do the killing. The cost for a human life is surprisingly low. Just a couple of thousand Swedish crowns and you can consider the job as done.

To kill a Prime Minister is a bit trickier and it needs careful planning. But if you know the Prime Minister’s plans in advance it will be a lot easier. Someone with that knowledge and a good motive wanted this to happen, and it was not PKK, any weapon deal with India, an Israeli guy or Christer Pettersson who was behind this or pulled the trigger. It was a professional hit man that killed Olof Palme and just wounded Lisbet without any damage.

We train a lot of these guys in the Swedish military to be operative secret agents around the world, so we don’t need to import one of them to do a tiny simple job like this. And it was someone else who ordered the job.

Sweden did not solve the mystery and did not catch the Palme murderer yet. I’m not surprised! Maybe it is just 9/11 “terror attack” on World Trade Center in New York, where you have similar amount of smoke screens and side tracks in the history.

Somebody wants to hide something! Open your eyes and you will see it too! You will probably now also understand why this murder mystery will never be solved.

I might be wrong in my conclusions here, but what if I’m right? Scary ha?

This site uses Akismet to reduce spam. Learn how your comment data is processed.